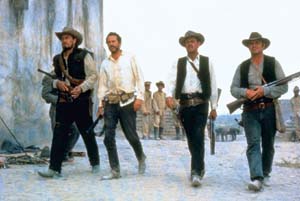 The work of Sam Peckinpah continues to receive a kingly treatment on DVD of a kind reserved for virtually no other director—and that includes such greats as Alfred Hitchcock, Orson Welles and John Ford. This box set contains a number of engrossing featurettes, but its greatest claim to comprehensiveness are five audio commentaries from a quartet of Peckinpah biographers who have seemingly made a cottage industry out of annotating the director’s filmography. The quartet cover all aspects of “twilight western” Ride the High Country, the underrated Ballad of Cable Hogue and Bloody Sam’s masterpiece The Wild Bunch. They kick into high gear, however, for the commentaries provided for both versions of Pat Garrett and Billy the Kid. The team highlights the differences between the two films, respecting the “Turner preview” version (formerly known as the “director’s cut”) but favoring a new edit that blends the best of the original bowdlerized theatrical version and the “Turner” edition yet is actually shorter (115 min.) than the latter. The Peckinpah specialists even get their own featurette in a segment from the documentary A Simple Adventure Story: Sam Peckinpah, Mexico and the Wild Bunch. Here, they enter Peckinpah country for real, gushing to the camera (in an intellectual fashion, of course) as they visit the Mexico locations where The Wild Bunch was filmed. The three best supplements in the collection are interviews with Peckinpah intimates: his sister, Fern Lea Peters; Stella Stevens from Hogue; and Billy the Kid himself, Kris Kristofferson (interviewed with bandmate and Peckinpah actor Donnie Fritts). Ms. Peters supplies a suitably homespun depiction of Sam’s childhood, while Stevens speaks fondly about him as an artist but makes no bones about his “mean” behavior to Hogue‘s cast and crew. Kristofferson and Fritts supply the single best original moments in the collection, as they recall Sam’s outrageous behavior on- and off-set and perform two touching Kristofferson ballads dedicated to the filmmaker. –Ed Grant