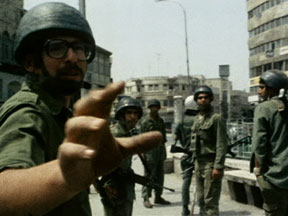 On the eve of the U.S. release of visionary Israeli filmmaker Gitai’s highest-profile project to date (Free Zone with Natalie Portman), Facets is releasing a set of six Gitai documentaries. This double feature supplies an excellent introduction to his non-fiction work, encompassing both a piece of reportage (Field Diary) and a thoughtful and vibrant essay (Arena). At first glance, Field Diary (1982) has the appearance of a straightforward cinema verité study of the Israeli occupation of the West Bank, but numerous on-screen titles and the unflinching way the camerawoman tracks Israeli soldiers on patrol clearly communicates Gitai’s eloquent pacifist message. This message is trumpeted loud and clear in Arena (1996), his reflection on the assassination of Yitzhak Rabin. The film is a mesmerizing collage juxtaposing footage of Gitai traveling around Israel, news broadcasts of the event and its aftermath, interviews with various experts (including Rabin’s widow) and rock songs addressing the incident. The emotion and visual beauty of both films set them apart from standard documentaries on the Middle East situation. Recommend to fans of cine-poets such as Jean-Luc Godard, Pier Pasolini and Abbas Kiarostami. –Ed Grant