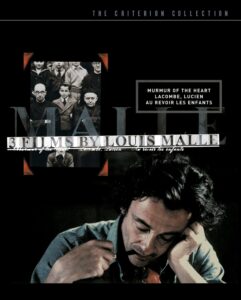 It is noted with some pride by his widow, Candice Bergen, that Louis Malle was a filmmaker who critics couldn’t pigeonhole easily. Malle did swing wildly between masterworks (The Lovers, Atlantic City) and missteps (Crackers), but the three films included here form a coherent trilogy about coming of age during the French occupation and the postwar period. The bonus disc’s extras in this collection reinforce Malle’s reputation as an uncompromising filmmaker who courted controversy. Two rather brief on-screen interviews from TV series Pour Le Cinema find Malle stressing that his films are not historical works per se and discussing his decision to cast a non-professional in the lead role of Lacombe, Lucien. Biographer Pierre Billard provides an overview of Malle’s early life and his favorite themes, while Bergen provides personal reminiscences of her late husband. She recounts how “wounded” he was by the bad reviews for Crackers and Alamo Bay and how those defeats led to the victory of Au Revoir. In addition to a full Charlie Chaplin short—The Immigrant on Au Revoir—the bonus disc contains nearly 2 1/2 hours of audio from Q&A sessions with Malle at the American Film Institute and London’s National Film Theatre. Perhaps most interesting is Malle confronting the issue of mother-son incest, as depicted in sentimentalized fashion in Murmur of the Heart. His comment that the sequence was “an old fantasy of mine that I tried to make happen on the screen” is clarified by his even more direct and eyebrow-raising remark, “It’s better to make a film about making love with your mother than dream about it all your life.” –Ed Grant