These Boots Are Made for Lickin’: The Kinky World of Nick Philips 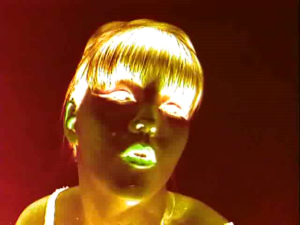 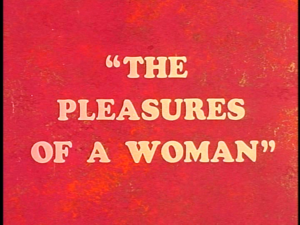 The first thing that strikes viewers used to the better-known softcore “auteurs” of the period (Meyer, Metzger, Sarno) is the anonymity of Philips’ movies. Each one begins with a single title credit (in quotes for some reason) and the film begins, with not a cast or crew name in sight. The movies similarly grind to a sudden halt and a solitary “The End” card appears on screen, sometimes before the last scene could be fully understood. Adult movie historians would ague that the lack of credits was a savvy move on Philips’ part, intended to dodge the legal troubles that plagued pornographers even after the landmark Deep Throat court battles.

But Philips himself (real name: Nick Millard, pictured at right with his wife Irmgard, is now age 64 and still making movies) attributes most of the hallmarks of his style to a lack of finances: “That was a way to save a buck. Titles cost money… Basically it was an economic thing, you know what I mean – save the money and use it for better things.”

Nick’s frugal methods of filmmaking and his kinship to the adult industry were a legacy from his father, S.S. Millard, a legendary producer and distributor of roadshow adult pix. “My father said he was the second man in the adult film business after a NY distibutor named Sam Cummings. His biggest hit was a piece of junk with the great title Is Your Daughter Safe? (1927) that was an Ed Wood-like bunch of scraps. He produced the films, and would then literally put the can of film in the trunk and go on the road, show the picture in Little Rock, Arkansas one week, Fort Wayne, Indiana the next.”

Although Nick, too, once worked as a distributor and even managed a theater for a time in Sacramento, California, his primary work for the past four decades has been as a low-budget filmmaker. He inherited his father’s traveling ways, though, and wound up filming softcore features not only in his hometown of San Francisco (right), but also in Paris, Munich, Spain and Denmark. Thus much of his softcore has a travelogue aspect to it, as his tortured lesbian characters walk the streets of the Haight-Ashbury (Sappho 68, seen at right), Munich (Birgitta), or Madrid (Passport to Pleasure) – in the latter film, we see an entire bullfight in between the couplings.

Philips used different actresses to perform this function over the years, and so these unsung heroines – performers Kimberly Cohen, Carol Daniels, Priscilla Alden and others – would be responsible for conveying the pictures’ faint storylines and also expressing the character’s feelings, which run hot (feverish les-lust) and cold (“we were quite happy in our dark, ugly, degenerate world” declares the heroine of Pleasures of a Woman).

At times, Nick journeyed into Russ Meyer territory, and would have his smoky-sounding narrators recite a free-version inventory of hyperbolic phrases that made the movie sound more like a trailer, as when the narrator of Passport talks about “images of the bizarre, extraordinary cinema, white-hot bitch heat, moist love, soft lips, hungry vaginas, screaming clitorises, hard phalluses, slick tongues…insatiable audiences!” 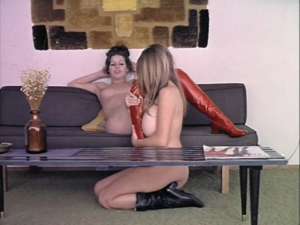 At other moments, one begins to question whether the “moral and redeeming social value” that Philips mentions he included in his pictures to get them past the censors motivated the constant put-downs of sexual freedom that punctuate the narration. Nick is a practicing Catholic who denies that his faith has had any effect on his moviemaking, but our sexy femmes’ description of themselves and their partners as “perverts,” “degenerates” and “bitches” while they cavort onscreen makes one wonder exactly what is up. The horny heroine of Pleasures of a Woman broods at one point, “Now I’d become a lesbian pillhead, which is slightly better than being a two-headed freak.”

When questioned about the fact that shoe and high-heel worship occur in quite a few of his adult movies, Nick notes that “fetishism kinda got you around the censors” who presumably couldn’t figure out what to cut when a woman went to town with her friend’s stiletto. He doesn’t shrink away from this unique element in his pictures, proudly proclaiming, “you’ve gotta know a little about sex if you’re going to make sex films….”.

When asked about his own tastes in ladies footwear — and yes, some of his hippie chicks remained barefoot throughout their sequences – Philips expresses amusement that “women still feign innocence, they’ll say ‘we didn’t know these four-inch heels are sexy!’” As for today’s platform heels, “it’s like looking at a person with a clubfoot.” His taste runs more to old-fashioned “sexy high-heeled shoes, like the ones from that guy Manolo Blahnik.”

He spends little time doting on the past, though, as he has kept on making ambitious low-budget features in every genre from horror (his much-beloved over-the-top slasher pics Criminally Insane and Crazy Fat Ethel 2) to biopics (Howard Hughes) to remakes of classic tales (Faust). His current roster of projects includes one title that could prove to be his long-awaited return to fetish filmmaking, Women Extreme: The Helmut Newton Story. We can only imagine what Nick, the man who gave us the ultimate junkie-hooker picture, Roxana, and the finest leather-lesbian feature ever, Fraulein Leather, could do with a biography of the lord high priest of kink photography. — Ed Grant