Who’s Next: the BBC’s Sexy New Sci-Fi Series (for videobusiness.com) 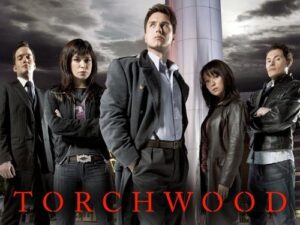 “We’re very cheeky about the sex and romance that we show on Torchwood,” says the show’s executive producer, Julie Gardner, who is also Head of Drama Commissioning at BBC Wales. The first season of Torchwood will be released on DVD in the first quarter of 2008 on BBC video; the show debuts on BBC-America on September 8th.

The series follows the exploits of the Torchwood Institute, an organization that copes with aliens, devices and anomalies that come through a rift in space and time located in Cardiff, Wales. “Torchwood first appeared in the first season of Dr. Who in the werewolf episode (no. 11),” explains Gardner. “That Torchwood was an arrogant group; on the series, it’s very different — a renegade, smaller, more reflective organization.”

Gardner stresses that Torchwood “works as standalone viewing for those unfamiliar with the Dr. Who universe, while Dr. Who fans will see some crossovers.” The show is unique for several reasons, chief among them its setting. “Cardiff is going through a renaissance at the moment, and it makes a good ‘modern city’ backdrop for the series.”

A factor that sets the show apart from its American counterparts is its blatant sex appeal. The second episode of the first season finds the Institute trying to capture a young woman possessed by an alien that lives off the energy from male orgasms. “We deal with adult, romantic, emotional issues on the show — it’s never just sex for sex’s sake,” says Gardner. That said, she is proud that the Institute’s leader, Captain Jack Harkness (John Barrowman), an American pilot with a mysterious past, “is possibly the first openly bisexual character on a sci-fi series.” [Harkness undergoes an attraction to the show’s “touchstone character,” Welsh policewoman Gwen Cooper (Eve Myles), but also is revealed later in the first season to have had a previous affair with a man.] Gardner ascribes the show’s open sexuality to the characters’ mission: “when you’re facing life and death situations, everyone’s going to fancy everyone.”

Gardner won’t offer detailed spoilers for the coming seasons of Dr. Who and Torchwood, but notes that figures from the past bedevil both the good Doctor and Captain Jack in episodes that have yet to appear in the U.S. The third season of Dr. Who in fact concludes with “the introduction of a new companion for the Doctor, and a face-off with his greatest enemy from the past!” She also reveals that U.K. viewers don’t have to wait to see the DVD extras for either series: Doctor Who Confidential and Torchwood Declassified are regular making-of shows that air immediately after both series on BBC3. –Ed Grant