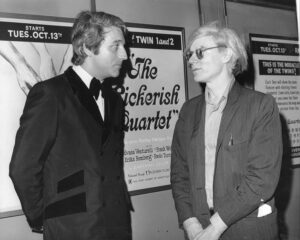 Back in the days when some moviegoers flocked to French and Swedish films hoping for a brief glimpse of skin or the “forbidden” sight of a couple in bed together, there was one American filmmaker who borrowed elements from the more “liberated” European directors and created his own wonderfully stylish brand of softcore erotica. His name, Radley Metzger, sounded thoroughly continental and so his films often “passed” for Euro product. He was one of the only porn directors who was taken seriously in the Swingin’ Sixties and the truly liberated early 1970s, and although there’s an overripe quality to the dialogue and performances in a few of his features, his ultra-groovy soft and hardcore features are still a joy to watch.

Like the other two softcore gods of the ’60s, Russ Meyer and Joe Sarno, Metzger cut his filmmaking teeth in the Army, serving in the Motion Picture unit during the Korean War. Unlike Meyer and Sarno, Metzger got his first commercial experience in the film biz as an editor removing censored scenes from (what else?) “risque” foreign films – ironic, given that the films he made and  distributed later on were the subject of various legal battles with state censors. Shortly after leaving the service, Metzger made a no-budget independent feature called Dark Odyssey (1957) with William Kyriakis. This family-loyalty drama, available from First Run Features, is notable only for its eye-catching NYC locations and its Greek-American milieu. In 1960, Metzger started the distribution company Audobon Films with a colleague and began a profitable career acquiring and “reworking” foreign movies. 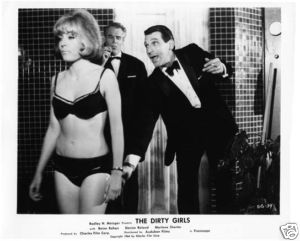 Metzger made his first adult feature in 1965. The Dirty Girls started a seven-year run of imaginatively made softcore movies, all of which are being brought out on DVD from First Run. Dirty set the tone for them all, with its La Dolce Vita-inspired Euro decadence, and two elements that became Metzger staples: location shooting in picturesque European cities and an amplified amount of implied sex. “They saw the nudity even if I didn’t put it in,” he later joked to an interviewer.

Metzger’s next b&w tease, The Alley Cats (1966), boasts some terminally cool surf music and some of the aforementioned overripe dialogue. When asked if she’s afraid of making love, one young lady declares, “I plan to go moist to heaven…” The transition to color in Carmen, Baby (1967) encouraged Metzger to make his tales of bored jet setters and their ladies of easy virtue even more bold and audacious. Two favorite moments: a girl entertains at a party by performing a suggestive dance with a phallic wine bottle to a pitch-perfect Herb Alpert-style instrumental, and the host of the same bash-cum-orgy encourages his female guests to get into the groove by offering “pills, ladies… pills!”

From ’67 to ’77, Metzger made four softcore classics and a small handful of hardcore features that rank among the best ever made. Therese and Isabelle (1968), his tale of a lesbian affair between French schoolgirls (supposed to be teens, but look severely twentysomething). The movie is still copied today – witness the Piper Perabo cumming-of-age cable staple Lost and Delirious (2002). It’s most notable for Metzger fans because it introduced his wildest trademark: the “obscured frame,” in which either the “naughty” part of what we’re watching is covered up – yes, Radley was one of the innovators who first used the technique spoofed to no end in the Austin Powers movies – or we view a sex act from a distance, usually through a distorted glass surface (most often a mirror). Thus, when we finally “see” Therese and Isabelle consummate their teen-girl love, they are seen: disappearing behind some furniture in a church chapel, reflected on the surface of a vase (!), and exploring each other’s bods in a stylishly composed long shot that reveals…not much of anything. Despite the obvious tease factor at work, the movie is still sexy as hell, since Metzger concentrates his energies on the build-up to sex, utilizing classical music and soft, graceful camerawork to complement a very obvious but effective voiceover. Our heroine Therese tells us what we’re missing visually, boasting in classically purple prose about the way Isabelle enters her: “Three fingers entering me, three guests to take the pleasure to…”

The Lickerish Quartet (1970) is Metzger’s most “experimental” and arguably his best movie. Fantasy and reality collide as a trio of jaded sophisticates (mother, son, stepfather) watch an old stag reel for entertainment (oh, the idle rich) and then discover that the brunette star of the loop is performing at a local carnival as a motorcycle stunt rider (!). Upon bringing the girl back to their labyrinthine castle, they find that the film has changed and their newly-blonde house guest is clearly going to have her way with the lot of them. As he moves this kinky variation on the arthouse classic Last Year at Marienbad, Metzger delivers his most extravagant sex scene ever: a bibliophile’s wet dream in which our blonde temptress, clad only in go-go boots, and the master of the house (a rather unsightly older man wearing nothing but black socks) screw in a home library, rolling over and over on a floor embossed with the dictionary definitions of words like “phallus,” “fornicate” and, naturellement, “fuck.” The male lead’s paunchy nude bod is one of several bizarre details (including quick cuts to that favorite bar toy, a bird dipping his head in a drinking glass) that Metzger inserts into Lickerish – they can be interpreted as tongue-in-cheek that the director himself is caught up in the same delirium his characters are experiencing. The last line of dialogue probably supplies the best answer: “Don’t take it so seriously, it’s only a film!”

Metzger’s last theatrically released softcore film, Score (1972), is the perfect product of the porno chic era, a film that couldn’t possibly appear in multiplexes today – unless, perhaps, it was made by Pedro Almodovar. Here a Dangerous Liaisons-like couple bet each other they can seduce an innocent young couple they’ve invited over for a dinner party. When the swinging takes place, the wives wind up together… as do the husbands. The fact that the evening’s events are fueled by pot and amyl nitrate makes Score a gorgeous relic from a far freer time; the film also was released in three separate cuts, each one containing a bit more of the male gay coupling – the current DVD from First Run is the “medium” cut favored by Metzger.

Now retired, Radley Metzger discusses his films only rarely in interviews, and seems to want to disassociate himself entirely from his Henry Paris period. Diehard fans of his work would easily choose to re-watch the Paris pics over his non-sex features, which range from the muddled and unintentionally funny Little Mother (1973) to the mellow whodunit spoof The Cat and the Canary (1979). Whatever Metzger’s own feelings are concerning his pornographic past, one thing’s certain: the people who crank out softcore for late-night cable slots would do well to study his soft and hardcore films, and discover exactly how to tease an audience with style. — Ed Grant